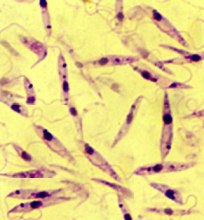 Leishmaniasis is a disease caused by the flagellate protozoan that belongs to the genus Leishmania and is transmitted by the bite of sand flies of the genus Lutzomyia in the New World and Phlebotomus in the Old World. The disease was named in 1901 after the Scottish pathologist William Boog Leishman.

Leishmaniasis is commonly found in Mexico, Central America, and South America—from northern Argentina to southern Texas (not in Uruguay, Chile, or Canada), southern Europe, Asia (not Southeast Asia), the Middle East, and Africa (particularly East and North Africa). The disease is not found in Australia or Oceania.

There are four main forms of leishmaniasis:

Visceral leishmaniasis – the most serious form and potentially fatal if untreated.

Cutaneous leishmaniasis – the most common form which causes a sore at the bite site, which heal in a few months to a year, leaving an unpleasant looking scar. This form can progress to any of the other three forms.

Leishmaniasis is transmitted by the bite of female phlebotomine sand flies. The sand flies inject into human blood the infective stage, metacyclic promastigotes, during blood meals. Metacyclic promastigotes that reach the puncture wound are phagocytized by macrophages but are not digested and transform into amastigote form. Amastigotes multiply in infected cells and affect different tissues, depending upon the part on which Leishmania species is involved.

These differing tissue specificities cause the differing clinical manifestations of the various forms of leishmaniasis. Sand flies become infected when blood meals are sucked from the infected host when they ingest macrophages infected with amastigote forms. In the sandfly’s midgut, the parasites change into promastigote forms, which multiply, differentiate into metacyclic promastigotes and migrate to the proboscis from where they can be easily transferred into human blood while sand fly feeds.

A nodule appears in the area of the sand fly bite or rash or ulceration may be formed. Four to six months after the bite, the following symptoms appear: Fevers twice a day with chills and sweats, cough, weakness, diarrhoea, weight loss, gums and nose may bleed and skin or eyes may turn yellow.

Leishmania donovani infection is identified on the following tests:

· Buffy coat preparation of the blood is a special technique of preparing blood film on slides, bone marrow, liver, lymph nodes, or the spleen for identification of the causative organism. The organism may also be cultured and then identified.

· IgM (an antibody reaction to the organism) agglutination testing is positive in infected persons.

· The total protein in the blood becomes elevated (10g/dL or more), while albumin level is low (3g/dL).

The most common treatment for visceral leishmaniasis was developed in1930s, using derivatives of antimony. Sodium stibogluconate (SSG) is taken as an intramuscular injection over 30 or more days. It is available under the brand name Pentostam. Another antimonial drug is Meglumine antimoniate available under the brand name Glucantime. It is not completely understood how these drugs act against the parasite. They may be disrupting its energy production or trypanothione metabolism. Unfortunately, in many parts of the world, the parasite for visceral or muco-cutaneous leishmaniasis has become resistant to antimony drugs but the level of resistance varies according to species.

Amphotericin is now the treatment of choice. AmBisome is an amphotericin B liposome formulation that is given as an intravenous infusion. AmBisome was registered for VL in the USA and Europe in the 1990s and has shown remarkable efficacy even after a single dose in India.

Miltefosine (Impavido) is a new drug for visceral and cutaneous leishmaniasis. Oral miltefosine was registered in India in 2002 and is now in Phase IV trials.

Currently, two drugs are under development, a drug to treat Chagas disease in Latin America and a drug, Paromomycin to cure visceral leishmaniasis in India. Paromomycin (aminosidine) is a low-cost intramuscular formulation that was registered in late 2006 in India and is currently in Phase III trials in East Africa.