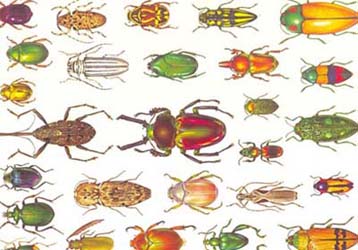 Only heritable changes have evolutionary significance, since they only make the population change from generation to generation as the evolution goes on. Variations can be of several types and can be classified in different ways based on the type of character taken into account.

2. Individual variations: These are differences among the individuals of the same population. They are very important in taxonomic studies, when extent of variation within a deme is taken into account for comparing and assigning the population to a taxon.

Variations can also be classified in the following 3 categories based on the type of character considered:

2. Quantitative variations: Variations that can be measured in size or weight, such as tall versus dwarf animal, heavy versus light body, long tail versus short tail etc.

Based on the continuity of a character the variations can be classified into the following two categories:

2. Discontinuous variations: These variations deviate greatly from the average individuals. Major mutations and disruptive selection produce some individuals, which are distinct from the others. For example, white tiger, hornless calf and albino peacock or cow.

Based on the inheritance, variations can be classified into the following two types:

1. Somatic variations: These are also called somatogenic variations, which are produced in the body due to the effect of environment. They are not heritable as they are not due to genetic changes, as for example, muscles of a wrestler, or weak individuals under starvation conditions.

2. Genetic variations: They are germinal variations that occur in genes. They are blastogenic, heritable and produce phenotypic changes in the populations. If somatic variations persist for a longer time, they tend to become genetic and become important in evolution.

Some variations not classified in the above-mentioned ways are as follows:

2. Seasonal variations: When animals change their appearances in different seasons, mainly as climatic adaptation, they are called seasonal variations, e.g. winter fur in temperate animals like snowshoe hare, whose fur becomes white in winter and brown in summer. Seasonal variations are commonly found in insects, like butterflies, grasshoppers, bugs etc.

3. Habitat variations: In sedentary animals like sponges, corals, oysters as well as in plants, variations are produced due to local environmental influences of the particular habitat. Some of the mobile animals, namely grasshoppers, locusts and plant bugs also show habitat variations. Chameleon can change its colour according to the habitat.

4. Castes in social insects: Division of labour in social insects, e.g. termites, honey bees, ants and wasps creates castes which have specialized organs to carry out a particular job in the colony. Therefore we can see different types of individuals moving about in the same population.

5. Polymorphism: When different types of individuals occur in a single interbreeding population of a non-social animal, it is called polymorphism. It is very common among insects, like butterflies and beetles, which show dry and wet season forms.