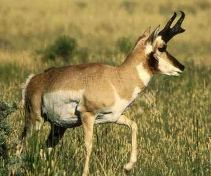 This region includes the north American continent up to the middle of Mexico. Climate is temperate with an arctic edge. There are grasslands in the middle of the continent. Western part is arid with mountains and coniferous forests.

Mammals.  There are 24 families of land mammals.

Neotropical species that have crossed over to North America are marsupials such as opossum (Didelphis virginiana), shrew opossum (Lestoros inca); 9-banded armadillo (Dasypus) and tree porcupine.

Birds. There are 49 families of birds in this region out of which 39 are widely distributed.

Fishes. There are many carps (Cyprinidae) and perches. Holostei are endemic that include only two surviving ganoid fishes, one species of bowfin (Amia calva) found in American lakes and 7 species of garpike (Lepidosteus) found in American rivers. These fishes possess sharp teeth to seize and gulp prey with extraordinary swiftness. Paddlefish (Polyodon) occurs in Mississippi river of America and represents Chondrostei. Another species of paddlefish occurs in China. These fishes have paddle-like snout that carries sensory organs for locating prey by detecting its electrical fields. Ameiurid catfishes, moon-eyes (Hiodontidae) and bass family with genera Morone and Upiblema are also endemic.

The fauna of Nearctic Region is rich in reptiles and is a complex of tropical and temperate animals.

Fauna includes 86 families of vertebrates that include vampire and free-tailed bats.

The fauna is poor and resembles palaearctic region. There are reindeer, sheep, bisons, lemmings, polar beer, elk and arctic fox.